The Artist that I Love to Hate_Damien Hirst

It is sometimes interesting to see an exhibition that you dislike. His work can either fascinate you or disturb your evening sleep. His artworks include dead animal displays, spin-art paintings, and hundreds of butterfly wings which are still sold for exceptionally high prices.

Damien Steven Hirst (British,1965) is a significant but controversial artist, entrepreneur, and art collector. His career started as a leading member of the art group widely known as the Young British Artists (Goldsmith University of London,1980) which were famous for their unusual materials and for their challenging art concepts. Hirst’s understanding of the distinction between painting and sculpture transformed significantly, resulting on some of his most important series like ‘Medicine Cabinets’. He once said “Science is the new religion for many people. It’s as simple and as complicated as that really.”

In 1991, Charles Saatchi offered to fund whatever artwork Hirst wanted to make. This work was titled ‘The Physical Impossibility of Death in the Mind of Someone Living’ and was a shark in formaldehyde inside a vitrine. “The glass boxes he employs, act to define the artwork’s space, whilst simultaneously commenting on the fragility of existence”.

In 2007 he created ‘For the Love of God’, an actual human skull encrusted with 8,601 flawless diamonds which costs over £50 million and its title comes from an expression regularly uttered by Hirst’s mother on hearing his early ideas for artworks. Art historian Rudi Fuchs, observed: ‘The skull is out of this world, celestial almost. It proclaims victory over decay. At the same time it represents death as something infinitely more relentless…’

Along with the acknowledgement of his work, also comes negative criticism about the aesthetics that he employs in his works which constantly defy beauty and moral standards.British Newspaper ‘Daily Mail’ headlined: “For 1,000 years art has been one of our great civilizing forces. Today, pickled sheep and soiled beds threaten to make barbarians of us all.”

Since 1987, he created over 80 Solo exhibitions worldwide and his work has been included in over 260 group shows. His contribution to British art scene over the last two and a half decades was recognized in 2012 with a major retrospective of his work staged at Tate Modern. I was lucky enough to be there too and this experience taught me that time changes peoples understanding of one subject and nothing is made to be forever. ‘During this exhibition, butterflies emerged from their cocoons, feeding on flowers around the room, creating a kaleidoscopic spectacle. His artwork is about the cycle of life and death.

Life comes from death, plants grow in soil, animals eat plants and die and fertilize the soil and life keeps moving on. 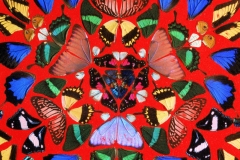 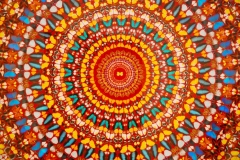 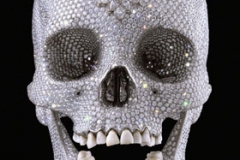 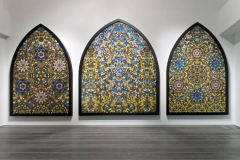